What our RV Solar Customers have to say

Here at Precision RV, we can talk all day about the RV Solar installations we’ve done over the years.  But in the end, we believe our customers can tell you even more.  While we’re thinking about Amp Hours, Watts, Inverters, and the rest, our customers are actually great at relaying the value we bring to every installation we do. 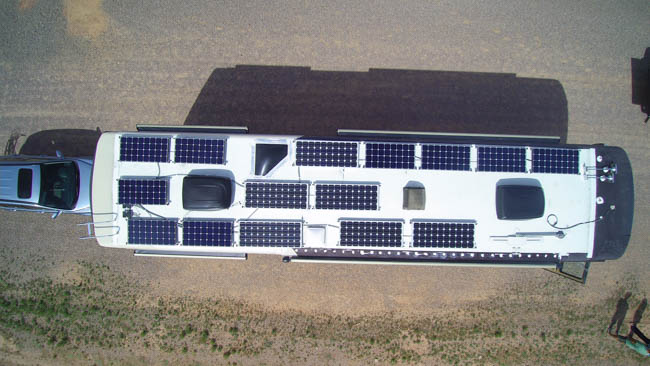 This installation offered a lot of power for our client

Paul & Nina actually put together a wrap up video on their series about the recent solar upgrade Precision RV did for them.  If you haven’t taken the time to pop over to their site, we’ve included the video here, including a quick interview with Marvin of Precision RV.

Paul and Nina over at WheelingIt.us know a little more than the average customer.  That’s because we’ve worked with them not once, but twice.

After their initial RV Solar Installation it didn’t take long for them to realize they wanted even more.  Full-time RV’ers have a habit of seeing the value in their solar systems quickly, and then wanting to expand their systems.

What is extra special here is that Paul and Nina came back to Precision RV when it was time for their expansion.  Not only did they select us again, they even documented the entire installation and our work.  And they’ve been kind enough to allow us to share links to their website with their entire explanation on their solar expansion, and also how the work came out from Precision RV!  The links below lead to their website, and the full story!

Marvin Braun – Precision RV is HIGHLY recommended for Solar RV needs.  He’s thorough, clean and HONEST!  We give Marv an A+ rating!  Way to go Marv!!  Jammin Along, November 2015

On the Road Abode – Comments Section

We had our solar installed by Marvin Braun with Precision RV.  He did an awesome job.

Forrest Shelton Clark – I am glad to see the Precision RV website back in operation. “Marvelous Marvin” did an outstanding job of installing solar panels, controllers, and a new inverter on our rig in December 2014. We promptly put it to the test by going out to Quartzite for five weeks and then boondocking at various spots in Feb. and March of 2015. The system has performed to perfection. It is everything we hoped for (and more, thanks to Marvin’s excellent advice). If I have to get anything else done on my RV, I hope I am near Marvin at the time.

Marvin Braun is an absolute ace.  Highly recommended, he can be contacted at PrecisionRV.com, marv@precisionRV.com, 206-276-2462.  Posted July of 2014

I contracted with Marvin Braun of Precision RV Service to do the installation.  Marvin came highly recommended.  Marvin arrived Thursday morning and started to work.  It was obvious that he knew what he was doing…….  Herb & Ginger’s RV Travel Adventures 2012

We recently worked with another full-time RV’er, Rich from the Airstream Chronicles, on his solar installation.  After being full-time for years and years with no solar system, Rich finally decided to get a new solar system set up for his 25 foot Airstream.

Talking with him was funny.  He said he’s been wanting to put a system in for years, but never got around to it.  It’s funny because we hear that often from RV owners who are thinking about their own solar system.  And even when they get in touch with Precision RV, it can still take a while before they finally make the decision to do their own solar setup.

Rich’s installation wasn’t as complex as other installs we’ve done.  He opted for a 600 Watt, 300 Amp hour system.  No inverter was required for this job, but we’re sure that down the road Rich will be getting in touch to expand his own system.